I knew the moment was coming and had been dreading its arrival - my daughters beloved Mrs Bunny has been much loved (and washed) and despite many many mending's was now more hole than bunny - Bunny needed a new body and I was the only person who could fix her........ 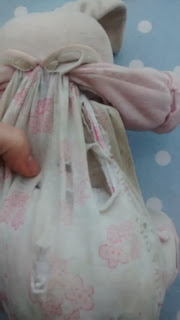 As soon as we realized all those years ago that Mrs Bunny was my daughters favorite toy we set about finding more of them - exactly the same make and design so that when the day came she would be easily replaceable - however none of the other 'Auntie Bunny's' or 'Sister Bunny's' had 'the right ears'. So I summoned up all my courage and surgical skills, removed her head, arms, legs, stuffing, rattle, and beanbag........ 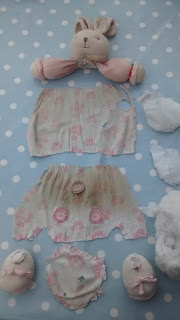 (for the record she really has been washed many times but still had that grubby brownness that favorite toys seem to develop!).

My daughter had chosen an old t-shirt of hers that she thought would make a suitable replacement body. I carefully cut around each fragile body piece to make the new pieces and set about hand stitching her head/and limbs back onto the new body pieces, I had to attach the bottom beanbag to the base piece, re stuff her (with frequent test hugs from my daughter to find the correct stuffing level), replace her rattle and then sew her up - this all sounds much easier than it was - this is probably one of the more trickier things I have sewn!

The look on my daughters face as I gave the newly mended bunny back was totally priceless and was worth the work it took 1 million times over! I'm not sure that my handiwork will last another 8.5 years but will do for now! 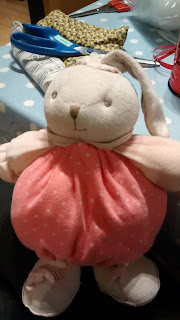 Have you ever had to mend any much loved toys - was it successful?